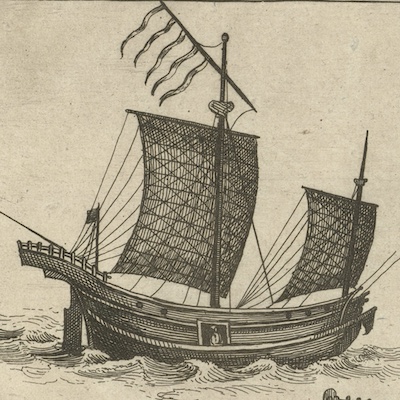 Piauwja (identified in Chinese sources as Xian Biao) was a maritime commander closely affiliated with the Zheng state on Taiwan. We know relatively little about Piauwja or the “pirate Piauwja” (rover Piauwja) as he is referred to in VOC records. Chinese local gazetteers reveal that he was a native of the Leizhou Peninsula, on the extreme western end of Guangdong. During the 1650s, he had joined forces with a local anti-Qing resistance movement based in the islands and ports along the littoral. There he remained until relentless attacks from Manchu forces successfully dislodged Piauwja and his allies, who fled across the border. Once in Tonkin, they took refuge with a Vietnamese warlord, whose protection gave Piauwja the opportunity to regroup by drawing refugees fleeing from the Qing evacuation into his depleted ranks. With this enlarged band, he ravaged the Gulf of Tonkin unchecked and seized several outposts on the island of Hainan. These raids resulted in retaliation from authorities on both sides of the border. Qing forces moved against him, while the Dutch, acting in their capacity as allies of the Tonkinese court, impounded Piauwja’s ships. Under intense pressure, Piauwja and his adherents fled to Taiwan, where they joined forces with Zheng Jing and became incorporated as a regular military division in his armies. In February 1667, Piauwja arrived in Cambodia with a large armed force. Once there, he moved to seize a share of the lucrative deerskin trade by attacking and burning the VOC outpost in Cambodia to the ground. Although he later disappears from the record, Piauwja’s arrival and activities in Cambodia reveal the intensity of VOC/Zheng competition which stretched across Southeast Asia.