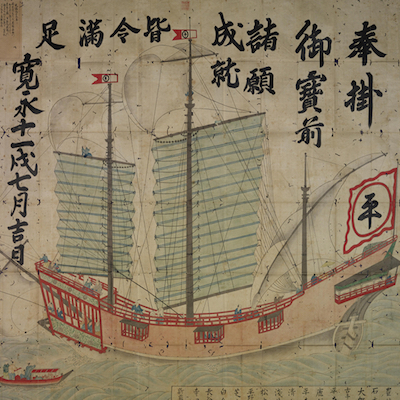 Suetsugu Heizō Masanao (d. 1630) was a Japanese official, merchant and entrepreneur who attempted to challenge the VOC presence on Taiwan. The Japan-Tayouan route was initially dominated by the Chinese merchant community in Japan and particularly by its chief, Li Dan, but his death in 1625 caused it to pass into the hands of two merchant/officials, Suetsugu Heizō Masanao and Hirano Tōjirō. The Suetsugu family had dominated commerce in Nagasaki for over a century. Heizō’s father, Suetsugu Kōzen Cosme, had moved to the port in 1571 and prospered as it boomed as the terminus of Portuguese trade. Heizō emerged as an important merchant in his own right in the late sixteenth century when he received a number of shuinjō to send ships to Southeast Asia. His political career took off in 1619 after he seized control of the important office of Nagasaki daikan by accusing the incumbent, Murayama Tōan, of a range of offenses. On Taiwan, Heizo refused to recognize the authority of the VOC governor there and demanded that the Company allow Japanese merchants to trade freely in Tayouan. The eventual result was a breakdown in relations between Tokugawa Japan and the Dutch East India Company that was only resolved in 1632.